Daniel Levitin [ 23 NOV 2015 | Prospective Thinking | 12:20 ] A few years ago, I broke into my own house. I had just driven home, it was around midnight in the dead of Montreal winter, I had been visiting my friend, Jeff, across town, and the thermometer on the front porch read minus 40 degrees — and don’t bother asking if that’s Celsius or Fahrenheit, minus 40 is where the two scales meet — it was very cold. 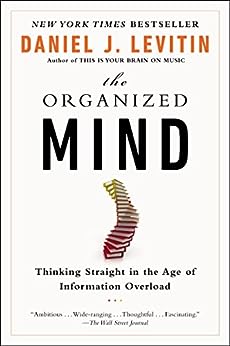 And as I stood on the front porch fumbling in my pockets, I found I didn’t have my keys. In fact, I could see them through the window, lying on the dining room table where I had left them.

So I quickly ran around and tried all the other doors and windows, and they were locked tight.

I thought about calling a locksmith — at least I had my cellphone, but at midnight, it could take a while for a locksmith to show up, and it was cold.

I couldn’t go back to my friend Jeff’s house for the night because I had an early flight to Europe the next morning, and I needed to get my passport and my suitcase.

So, desperate and freezing cold, I found a large rock and I broke through the basement window, cleared out the shards of glass, and crawled through.

I found a piece of cardboard and taped it up over the opening, figuring that in the morning, on the way to the airport, I could call my contractor and ask him to fix it.

This was going to be expensive, but probably no more expensive than a middle-of-the-night locksmith, so I figured, under the circumstances, I was coming out even.

Now, I’m a neuroscientist by training and I know a little bit about how the brain performs under stress.

It releases cortisol that raises your heart rate, it modulates adrenaline levels and it clouds your thinking.

So the next morning, when I woke up on too little sleep, worrying about the hole in the window, and a mental note that I had to call my contractor, and the freezing temperatures, and the meetings I had upcoming in Europe, and, you know, with all the cortisol in my brain, my thinking was cloudy, but I didn’t know it was cloudy because my thinking was cloudy.

And it wasn’t until I got to the airport check-in counter, that I realized I didn’t have my passport.

So I raced home in the snow and ice, 40 minutes, got my passport, raced back to the airport, I made it just in time, but they had given away my seat to someone else, so I got stuck in the back of the plane, next to the bathrooms, in a seat that wouldn’t recline, on an eight-hour flight.

Well, I had a lot of time to think during those eight hours and no sleep.

And I started wondering, are there things that I can do, systems that I can put into place, that will prevent bad things from happening? Or at least if bad things happen, will minimize the likelihood of it being a total catastrophe.

So I started thinking about that, but my thoughts didn’t crystallize until about a month later.

I was having dinner with my colleague, Danny Kahneman, the Nobel Prize winner, and I somewhat embarrassedly told him about having broken my window, and, you know, forgotten my passport, and Danny shared with me that he’d been practicing something called prospective hindsight.

It’s something that he had gotten from the psychologist Gary Klein, who had written about it a few years before, also called the pre-mortem.

Around the home, designate a place for things that are easily lost. Now, this sounds like common sense, and it is, but there’s a lot of science to back this up, based on the way our spatial memory works. There’s a structure in the brain called the hippocampus, that evolved over tens of thousands of years, to keep track of the locations of important things — where the well is, where fish can be found, that stand of fruit trees, where the friendly and enemy tribes live.

The hippocampus is the part of the brain that in London taxicab drivers becomes enlarged.

It’s the part of the brain that allows squirrels to find their nuts.

And if you’re wondering, somebody actually did the experiment where they cut off the olfactory sense of the squirrels, and they could still find their nuts. They weren’t using smell, they were using the hippocampus, this exquisitely evolved mechanism in the brain for finding things.

What about travel? Take a cell phone picture of your credit cards, your driver’s license, your passport, mail it to yourself so it’s in the cloud.

If these things are lost or stolen, you can facilitate replacement. Now these are some rather obvious things. Remember, when you’re under stress, the brain releases cortisol. Cortisol is toxic, and it causes cloudy thinking. So part of the practice of the pre-mortem is to recognize that under stress you’re not going to be at your best, and you should put systems in place.

And there’s perhaps no more stressful a situation than when you’re confronted with a medical decision to make.

At some point, all of us are going to be in that position, where we have to make a very important decision about the future of our medical care or that of a loved one, to help them with a decision. And so I want to talk about that. And I’m going to talk about a very particular medical condition. But this stands as a proxy for

And you’ve probably heard of statins, you know that they’re among the most widely prescribed drugs in the world today, you probably even know people who take them. And so you’re thinking, “Yeah! Give me the statin.”

It’s for the number needed to treat.

Now, what is this, the NNT? It’s the number of people that need to take a drug or undergo a surgery or any medical procedure before one person is helped.

And you’re thinking, what kind of crazy statistic is that? The number should be one. My doctor wouldn’t prescribe something to me if it’s not going to help.

But actually, medical practice doesn’t work that way. And it’s not the doctor’s fault, if it’s anybody’s fault, it’s the fault of scientists like me. We haven’t figured out

So the number needed to treat for the most widely prescribed statin, what do you suppose it is? How many people have to take it before one person is helped?

This is according to research by research practitioners Jerome Groopman and Pamela Hartzband, independently confirmed by Bloomberg.com. I ran through the numbers myself.  300 people have to take the drug for a year before one heart attack, stroke or other adverse event is prevented . Now you’re probably thinking, “Well, OK, one in 300 chance of lowering my cholesterol. Why not, doc? Give me the prescription anyway.”

But you should ask at this point for another statistic, and that is, “ Tell me about the side effects .”

So for this particular drug, the side effects occur in 5% of the patients. And they include terrible things — debilitating muscle and joint pain, gastrointestinal

distress — but now you’re thinking, “5%, not very likely it’s going to happen to me, I’ll still take the drug.”

But wait a minute. Remember under stress you’re not thinking clearly.

Think about how you’re going to work through this ahead of time, so you  don’t have to manufacture the chain of reasoning on the spot . 300 people take the drug, right? One person’s helped, 5% of those 300 have side effects, that’s 15 people.  You’re 15 times more likely to be harmed by the drug than you are to be helped by the drug .

I’m not saying whether you should take the statin or not. I’m just saying you should have this conversation with your doctor. Medical ethics requires it,  it’s part of the principle of informed consent .

You have the right to have access to this kind of information to begin the conversation about whether you want to take the risks or not.

Now you might be thinking I’ve pulled this number out of the air for shock value, but in fact it’s rather typical, this number needed to treat.

For the most widely performed surgery on men over the age of 50, removal of the prostate for cancer, the number needed to treat is 49. That’s right,

49 surgeries are done for every one person who’s helped . And  the side effects in that case occur in 50 percent of the patients .

And if you’re lucky, and you’re one of the 50 percent who has these, they’ll only last for a year or two.

So the idea of the pre-mortem is to think ahead of time to the questions that you might be able to ask that will push the conversation forward.

You don’t want to have to manufacture all of this on the spot.

And you also want to think about things like quality of life. Because you have a choice oftentimes, do you I want a shorter life that’s pain-free, or a longer life that might have a great deal of pain towards the end? These are things to talk about and think about now, with your family and your loved ones.

You might change your mind in the heat of the moment, but at least you’re practiced with this kind of thinking.

Remember, our brain under stress releases cortisol, and one of the things that happens at that moment is a whole bunch on systems shut down. There’s an evolutionary reason for this. Face-to-face with a predator, you don’t need your digestive system, or your libido, or your immune system, because if you’re body is expending metabolism on those things and you don’t react quickly, you might become the lion’s lunch, and then none of those things matter.

Unfortunately, one of the things that goes out the window during those times of stress is rational, logical thinking, as Danny Kahneman and his colleagues have shown.

So we need to train ourselves to think ahead to these kinds of situations.

I think the important point here is recognizing that all of us are flawed. We all are going to fail now and then. The idea is to think ahead to what those failures might be, to put systems in place that will help minimize the damage, or to prevent the bad things from happening in the first place.

Getting back to that snowy night in Montreal, when I got back from my trip, I had my contractor install a combination lock next to the door, with a key to the front door in it, an easy to remember combination. And I have to admit, I still have piles of mail that haven’t been sorted, and piles of emails that I haven’t gone through. So I’m not completely organized, but I see organization as a gradual process, and I’m getting there.

Daniel Levitin is James McGill Professor of psychology and behavioral neuroscience at McGill University in Montreal and author of bestselling popular science book The Organized Mind: Thinking Straight in the Age of Information Overload (2014)