Todd Rose [ 30 JAN 2012 | Data Literacy] I’m going to try and wander and if I make it back to the podium it’s because I forgot what I was going to say and my notes are there. Um, so, at, ah CAST, where I work, we pioneered a framework called Universal Design for Learning. 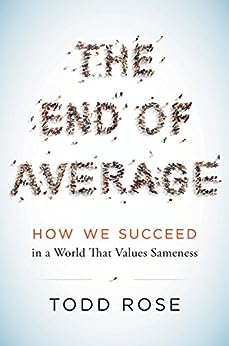 Today, I actually want to tell you about the problem that we were trying to solve with that framework. It’s the myth of the average learner.

I’ll argue that this myth has actually hurt our competitive advantage in education because its lead us to a place where we design learning environments that ignore variability and also our greatest asset, our diversity.

My basic point that I want make today is I think straightforward, that learning is way more variable that a lot of people assume, and that the understanding that variability is critical when we think about designing this next generation of learning environments.

I’ve been told that one way, if you want to get a new perspective on your own field, is that you can step back and look somewhere else for analogies. So that’s what I want to do. We’ll get to issues of STEM and issues of cyber learning but I want to get there with two examples variability that will seem really far removed: shoes and Rubik’s Cubes.

We were told at the kickoff that there’d be some imagination going on today, so this is my contribution to the imagination. I want for you to imagine just for a moment that we live in a world that believes in a different myth: the myth the average foot.

Let’s just call it a men’s size eight an a half. And I also want you to imagine that you were all asked to be here not because you’re smart, but because you might have potential to be great sprinters. So, just a simple question, if you want to think about how you might fare, given your foot size, in a world that was a size eight and a half, it’s obvious right? Like the closer you are to that eight and a half, the more likely it is that you would be able to reach your full potential, whatever that is.

Actually we’d just say you’re bad at running, but that’s a different conversation. The good news is, that we don’t actually live in a world that believes this myth, because we can see the variability.

And because we can see it, we design for it.

And when we design for it, we end up being able to recognize talent that would have otherwise gone unnoticed, like Usain Bolt. If you don’t know who he is, you will in the London Olympics. Fastest man in the world by far, and he’s six-five and wears about a size thirteen.

So, the problem is, we DO live in a world, I would argue, where most people believe in some version of the myth of the average learner. Which is a little surprising, if you think about it, that we’ll, we can recognize that our feet vary but we have a hard time extending that for things like how we learn, and even our brains for that matter.

And as someone who spends time thinking about the brain, this one really is kind of funny to me. I mean, your brain has like billions of neurons interacting to form networks that interact with your environment, and are constantly being shaped by your experience. Yet somehow, magically, out of that complexity, we think that our brains end up more or less the same?

But the truth is, they’re not.

I mean, neuroscience is crystal clear on this point. That when it comes to the brain, just like when it comes to learning, variability’s the rule, not the exception. Now, that variability is harder to see sometimes, than it it with like, foot size, but it’s there and it really matters.

So let me give you an example. The Rubik’s Cube.

This has to be one of the most frustratingly simple tasks ever devised, right? So, most of us have tried it, some of us may have completed it, but very few of us are what I would call an expert at it, which is: can you solve it in under 30 seconds?

So there are people that can do this, but what’s more interesting than that, is that when you look at that elite group it turns out: there are many different strategies that they can use to get them to expertise.

For example, if you’re good at being able to do pattern recognition really quickly, there is a specific strategy for you, and it’s a different strategy that if you’re one of those wiz kids that can memorize 50 algorithms in your head.

But there’s a strategy for you based on that, too. The only strategy you don’t want to use is the one I used as a little kid, which involves peeling stickers off.

It turns out, people totally know you cheated, and, uh, it takes way longer than 30 seconds. Um, the trick is here, is that basically if you wanted to be an expert at the Rubik’s Cube, there are many strategies you could choose from and the best strategy would depend on your particular variability.

I want to stay with the Rubik’s Cube example, and I want to extend this to a different dimension variability, not just strategy.

This is T.V. Raman, a colleague of mine. He’s a computer programmer at Google. Bright guy, and he’s been blind since childhood. So we just think for a minute how we might design a learning environment where Raman could demonstrate his potential at a Rubik’s Cube.

Before we could even think about differences in strategy, we would have to think about the way the cube is represented to begin with. Color is an arbitrary choice, and it’s not the only way that we could have represented the cube.

A simple answer would be just to change the representation, and people have done this.

Here’s a, a Braille Rubik’s cube. and if you’re like me the first thing I did, I looked at that and said “wow, that is beautiful.”

And then I start thinking, “but wait a minute. Is that really good design? Why is it white? Now, only if you can read Braille can you use that cube.”

If you don’t read Braille, you’re locked out of it. And now we’re stuck building two cubes.

So now we start to lose economy of scale. But it didn’t have to be that way, right? If we would have thought about variability up front, we could have designed a cube from the beginning with multiple representations and then imagine if we actually, at the same time, in that learning environment, explicitly taught the different strategies that could get you to expertise. Now we would be somewhere closer to supporting variability. Somewhere closer to Universal Design for Learning.

And somewhere where we would be able to recognize talent that would have otherwise been overlooked like TV Raman.

Turns out he’s a man of many talents, including being an expert at the Rubik’s Cube. 24 seconds. It’s kind of amazing actually, but the thing is, is that’s only possible through good design.

I would argue good design is only possible when we understand variability.

This is important because the increase in variability means but there’s a bigger cost to believing in the myth of the average learner, because it means we will design environments that are not really a very good fit for most students.

It means that we have the risk of missing out on a lot of talent that could have added to our competitive advantage.

But the thing is, it’s even bigger than that.

Think about the United States. We are one of the most diverse countries in the history of the world, but that means that the myth hurts worse than it does other countries because it leads us to neglect what are our greatest assets: our diversity and our capacity for innovation.

So it makes me think about this: We often hear these reports that say in high schools our performance in STEM is lower on average than it is to some other countries. But I would ask you: what if that’s not the right way to think about it?

What if the average doesn’t actually define us?

What if we tried to win in a different way?

By being very serious about designing environments that genuinely support the full range of the learners in our classrooms?

It’s a different approach, and it would be challenging, but I think it would be worth it. So, lastly, when I think about what this means for why we’re here, for cyber learning, I think it means we have a choice to make.

What do we want cyber learning to be?

Math is a Language