Denise Besserat-Schmadt [ 18 JUN 2014 | Data Literacy | 3:26 ] We learn to count at such an early age that we tend to take the notion of abstract numbers for granted. We know the word “two” and the symbol “2” express a quantity that we can attach to apples, oranges, or any other object. We readily forget the mental leap required to go from counting specific things to the abstract concept of number as an expression of quantity. 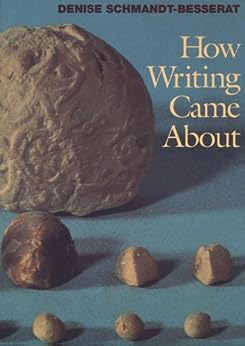 Abstract numbers are the product of a long cultural evolution. They also apparently played a crucial role in the development of writing in the Middle East. Indeed, numbers came before letters, contends art historian and archaeologist Denise Schmandt-Besserat of the University of Texas in Austin. In contrast, the traditional view is that the first written words were pictures or hieroglyphs used to represent objects or ideas.

Schmandt-Besserat has described the evidence and reasoning that led her to such a startling conclusion in several books and various research papers, including the fascinating account How Writing Came About, published in 1996.

When Schmandt-Besserat began her studies more than 3 decades ago, she was looking for the earliest examples of the human use of clay. She went from museum to museum, reviewing clay collections from Middle Eastern  cultures that thrived between 8000 and 6000 B.C.  She expected to see bricks, beads, and figurines. To her surprise, she also discovered hoards of little clay objects that could easily pass for children’s playthings.

The clay objects came in a variety of geometric shapes, including cones, spheres, disks, cylinders, and tetrahedrons.  Some appeared to be miniature models, an inch or less in size, of animals and tools . Perforations and various markings adorned other objects.

The first appearance of such tokens in the archaeological record of the Middle East  coincides with the development of agriculture in the period from 8000 to 7500 B.C.  The Sumerians, formerly hunters and gatherers, began settling in villages in the fertile valley of the Tigris and Euphrates rivers.

Archaeological studies of the period show evidence of grain cultivation in fields surrounding villages, the construction of  communal silos  for storing grain, and a rapid increase in population. In such a setting, individual farmers needed a reliable way to keep track of their goods, especially the amount of grain stored in shared facilities.

It seems they did it by maintaining stocks of baked-clay tokens—one token for each item, different shapes for different types of items. A marble-sized clay sphere stood for a bushel of grain, a cylinder for an animal, an egg-shaped token for a jar of oil. There were as many tokens, or counters, of a certain shape as there were of that item in the farmer’s store.

Thus, tokens could be lined up in front of accountants, who doubtless organized them according to types of goods and transactions. They could even be arranged in visual patterns to make estimation and counting easier.

This  simple system of data storage  persisted practically  unchanged for almost 4,000 years , spreading over a large geographic area. Eventually, the growth of villages into cities and the increasing complexity of human activities, especially in southern Mesopotamia,  forced a shift  to a more versatile means of record keeping. This shift was marked by the appearance of elaborate tokens alongside the well-established system of simple counters. Though similar in size, material, and color and fabricated in much the same way as their plainer cousins, the new tokens bore surface markings and showed a greater variety of shapes.

The elaborate tokens were apparently used for manufactured products—the output of Sumerian workshops. Incised cones and rhomboids probably represented loaves of bread and vessels of beer. Disks and parabolic tokens marked with lines signified different types of fibers, cloths, and finished garments. Incised cylinders and rectangles stood for ropes and mats. Other tokens seem to have represented luxury goods, including perfumes and various kinds of metalwork.

The advent of complex tokens coincided with the emergence of powerful central governments and the construction of monuments and great temples, beginning around 3350 B.C. Art from that period shows the rise of a governing elite and the pooling of community resources for celebrating large festivals.  The token system , extended to cover goods and services,  played a key role in managing massive building projects and orchestrating large public events .

Temple excavations reveal that the Sumerians often kept sets of tokens in clay globes, or envelopes. Temple clerks marked the envelopes by pressing tokens into the soft clay before sealing and baking them, making visible the number and shape of tokens enclosed. Excavated specimens show circular imprints left by spheres and wedge-shaped imprints left by cones.

Once sealed in their clay cocoons, the tokens were hidden from view. It didn’t take long for  busy bureaucrats  to realize that once the clay envelopes were marked, it was no longer necessary to keep the tokens. In fact, the marks by themselves, impressed on a clay tablet, were sufficient.

Complex tokens couldn’t be stored in clay envelopes as conveniently as simple counters because they often left indecipherable impressions. Instead, perforations allowed such tokens to be strung together, with special clay tags apparently identifying the accounts. In this case, the shortcut that the bureaucrats discovered was to inscribe the incised pattern found on the surface of a complex token directly onto a clay tablet. For example, they could replace an incised ovoid token with a neatly drawn oval with a slash across it.

The result was a practical, convenient data storage system. A small set of clay tablets with neatly aligned signs was much easier to handle than an equivalent collection of loose tokens, and using a stylus for marking clay tablets was a lot faster than making an impression of every token.

Around  3100 B.C. , someone had the bright idea that, instead of representing, say, 33 jars of oil by repeating the symbol for one jar 33 times, it would be simpler to precede the symbol for a jar of oil by numerals—special signs expressing numbers. Moreover, the same signs could be used to represent the same quantity of any item.

The signs chosen for this new role were the symbols for the two basic measures of grain. The impressed wedge (cone) came to stand for 1 and the impressed circle (sphere) for 10.

In this way, the token system evolved into a kind of shorthand in which signs representing standard measures of grain, impressed on a clay tablet, came to represent not grain or any other specific commodity, but the concept of pure quantity. It was a revolution in both accounting and human communication. For the first time, there was a reckoning system applicable to any and every item under the sun.

Thus, “writing resulted not only from new bureaucratic demands but from the invention of abstract counting,” Schmandt-Besserat argued in How Writing Came About. “The most important evidence uncovered is that counting was not, as formerly assumed, subservient to writing; on the contrary,  writing emerged from counting .”

Clay tokens became obsolete by 3000 B.C., replaced by pictographic tablets that could represent not only “how many” but also “what, where, when, and how.” With the introduction of a new type of stylus, pictographic writing developed into cuneiform notation. The resulting record-keeping system proved so efficient and convenient that it was  used in the Near East for the next 3,000 years .

“The tokens were mundane counters dealing with foods and other basic commodities of everyday life, but they played a major role in the societies that adopted them,” Schmandt-Besserat concluded. “They were used to manage goods, and  they affected the economy; they were an instrument of power, and they created new social patterns; they were employed for data manipulation, and they changed a mode of thought .

“Above all,” she continued, “the tokens were a counting and record-keeping device and were the watershed of mathematics and communication.”

Although other scholars tend to agree that Sumerian tokens could have been devices for keeping track of goods, some argue that writing was a largely independent development. These skeptics insist that there’s little evidence that cuneiform writing arose directly out of a token-based accounting system. Moreover, it’s likely that writing developed independently in different parts of the world—in Mesopotamia, in the Indus River valley, and in Egypt—with each region producing its own unique form of expression for its own purpose.

In response, Schmandt-Besserat contends that she has strong archaeological evidence—thousands of tokens and hundreds of clay envelopes and early tablets—to support her theory.

Schmandt-Besserat is now exploring how  the development of writing influenced art by providing a way of presenting stories  on vases and other surfaces.  Before writing, the patterns were largely geometric; after writing, there was narrative , she says.