Anya Kamenetz [ 5 FEB 2014 | Reinventing Education ] Reihan Salam interviews Anya Kamenetz Salam is the executive editor of “National Review” and a columnist for Slate, as well as a contributing editor at National Affairs, an interviewer for VICE, and a fellow at the University of Chicago Institute of Politics. He graduated from Harvard in 2001 with a degree in Social Studies. 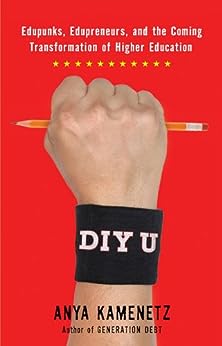 Originally from Baltimore, Anya Kamenetz is an American writer living in Brooklyn, New York City. She is a staff writer for Fast Company magazine, a columnist for Tribune Media Services, and lead education blogger at NPR. During 2005, she wrote a column for The Village Voice called “Generation Debt: The New Economics of Being Young”. Her first book, Generation Debt, was published by Riverhead Books in February 2006. Her writing has also appeared in New York Magazine, The New York Times, The Washington Post, Salon, The Nation, The Forward newspaper, and Vegetarian Times.

In 2009, Kamenetz wrote a column called “How Web-Savvy Edupunks Are Transforming American Higher Education” and, in 2010, a book on the subject entitled DIY U: Edupunks, Edupreneurs, and the Coming Transformation of Higher Education. In 2010, she was named a Game Changer in Education by the Huffington Post.

DIY U
Tagged on: Reinventing Education